Wunderlist. Just happened to find out this useful Apps that helps to manage your task. It helps especially you are workaholic or busy person – lots of appointment and scheduled task.

It is easy to use,  you can just simply key in your task descriptions and assign time and date for that particular task. So that it will reminds you to execute the job you’ve planned.

You may no need to assign date or time as well. If you have something that is still pending, that task categorised under “No Dates”, in which you can manage them later, assigning dates to each task respectively at your own convenience.

Good thing about this Apps is that it is cloud apps. That every task data will kept in the server and you can access them everywhere and cross-platform, be it on your iPad, iPhone, Macs, smartphone, PC and etc, so you will not worry the data gone missing or out of date when you using different gadgets or devices. This is great, isn’t it?

What is creative? In a simple way to explain, it’s the ability to create something. But nowadays many people failed to create something new due to being bound by the rules. By carrying out something continuously repeating the same way without any changes won’t bring you anywhere. You are just “copying” the previous process, and execute it in the same manner. In the end you will never get new outcomes.

That’s why when people talk about creative, they say “think out of the box”. Which is something that oppose the current rules or guideline you’ve been following through and through.

Well, I am not saying that doing the daily routine makes you not creative. Daily life routine is NECESSARY. But the only thing is that you need to put a little effort, so that you could improve your life, that’s makes the different in your life as well. “Different”, is also one of the key found in creative.

There’s another extreme point of creativity. In fact, if you never willing to do routines, you will not getting into creative. Because creativity has got to do with idea relating. In which some cases, you are joining the all single piece of ideas or information into something new. By doing routine, you are gaining experience, hence you received ideas and information on something. The more you expose yourself into these thoughts, the more new idea you are able to generate. You can be creative, isn’t it wonderful.

Remember every human has two sides of brain? Being a creative person is really depends on how much effort you willing to put into your mental process. Not just by rely on which dominant you born to be.

If you are born to be right-brain dominant, please do not be too proud of that you are belonging to the creative group. If you never use your brain to think, you are not getting anywhere, too.

If you are born to be left-brain dominant, please don’t be discouraged. Because sometimes you have creative thoughts, but you didn’t realized it. Keep on practicing it, and you will the magic. 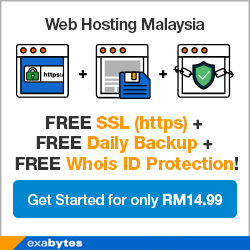